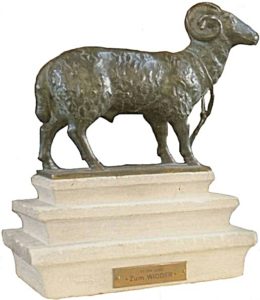 When asked where the name of our St. John's Lodge comes from, the following is to be said: The founder of our St. John's Lodge had emerged from the box "Pégase" and the brothers of the time had close relations with the Berliner Johannis lied "zum Golden Schiff" and "Pegasus". Since the symbol of the "Flying Horse" (Pegasus) is already taken from Greek mythology, and the "Golden Ship" is referred to the vehicle of the Argonauts, which after the Greek saga in a military campaign the precious fleece of the golden RAM, so The conclusion is allowed that the symbol for a new lodge was taken from this circle of ideas, especially since a whole series of established lodges in their names show relations with the Greek World of Legends and this type of naming is the time taste Was. Our symbol is probably the golden ram of the Merkurius, which the god of the merchants of the Nephele bestowed. Whether the name is borrowed from this atoning Golden Fleece, by the Egyptians as a sun symbol, or by the Orphic Oracle victims of the Hellenes, it emerges from all that the Aries at all times as a symbol of religious cult, civilization and fertility has been revered. So let's assume that our benefactors, with the symbol of the "golden Aries", wanted to denote something particularly precious, worthy of veneration, as it was the Aries of the Greek sage, who, in symbolic interpretation of God, returned to him in the sacrifice after The saving deed to man was accomplished.